Bats in the Belfry! 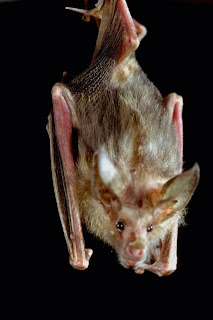 I came into church at about 8:15am to pray & I got dive-bombed by this 'swoopy' thing. At first I thought it was a bird, then I realized it was a bat.

I tried calling the church office but kept getting a busy signal...after about 10 minutes I got through. In the mean time I kept a close eye on that bat. I was not happy when he roosted on the statue of our Blessed Mother...but if she's like St. Francis, then I'm sure she forgives it. Poor little (actually big!) thing must have been scared.

Anyway...in come the two seminarians to 'capture' the bat....but since one of them was carrying a baseball bat with him, I wasn't so sure they meant to do a 'live capture'.

Of course, this is the moment the bat decided to disappear. It must have known it's days where numbered! Personally I can't blame the poor thing.

Now I have to give a nod to one of the lads who actually genuflected at the altar before searching for the bat. I was too distracted to do that.

I have not the courage to force myself to seek beautiful prayers in books; not knowing which to choose I act as children do who cannot read; I say quite simply to the good God what I want to tell Him, and He always understands me.